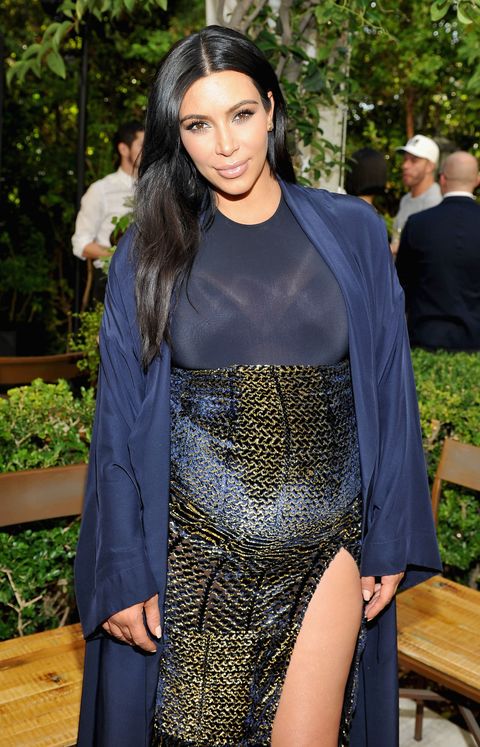 Although Kim Kardashian remains faithful to her signature look (mostly comprised of form-fitting frocks, sky-high stilettos and commercial-worthy raven locks), she's been known to switch up her image here and there by making a quick change to those enviable tresses of hers.

Unless you haven't paid attention to social media over the past eight years, chances are you're already familiar with some of Kim's most memorable hair transformations: She's played with color (Who can forget that bleached lob from Paris Fashion Week?), has experimented with bangs (which she admittedly regretted) and has even employed the magic of wearing a wig (when she wasn't fully committed to going blonde in 2009).

If you've ever wondered which of Kim's mane moments are among her favorites, allow your curiosity to subside—because during an Instagram takeover for Kardashian Beauty Hair, the reality star revealed the 15 styles that she remembers most fondly. Here they are below:

1. A honey-hued wig: "I had everyone fooled with this look back in April, 2009, which was really a wig. But this actually inspired me to dye by hair blonde a few months after this pic was taken."

2. Pinned up barrel curls: "I loved this short look for a photoshoot in 2009 created using pins and LOTS of hairspray!! Xo"

3. A platinum lob: "For my Elle shoot I went platinum blonde! It took multiple sittings, and was probably the most drastic hair change I've ever made, but I loved it!"

5. Unwashed: "Just a little bit messy! This is a fun look if I don't want to wash my hair again the day after I washed it, I'll throw in some of our dry shampoo!!"

6. Major teasing: "This was for a beauty shoot in 2012. We tried a lot of different looks this day. This one took a lot of time to brush out, so we saved it for one of the last shots."

7. "Actually" blonde: "This was the first time I actually went blonde for real back in 2009. I debuted the look at The Teen Choice Awards."

8. Sideswept waves: "This is after I cut my bangs again in 2013 and then quickly got over them! @jenatkinhair was able to hide them using hairspray and brushing them into the curl to the side before my appearance on Jay Leno that night. It's a great tip for anyone trying to hide their bangs while they grow out."

9. Short with volume: "I went short for the Grammys. This is the shortest I've gone. We added lots of volume and keep the look a little untidy. I'm really loving @khloekardashian's new shorter look though!"

10. An "illusion" haircut: "Ok this look was shorter but it's an illusion lol! This short look was created by @makeupbymario. At the time my hair was super long, and I wanted a new look but didn't want to cut it, so this was perfect for an event."

11. A fashionably (almost) late look: "My glam team was freaking out because we were doing a live MTV show and my flight was delayed due to weather and I've never been late. We ended up getting the look done and were ready on time!!"

12. A sleek ponytail: "A sleek ponytail is one of my go-to looks at the moment. I usually wash my hair maybe every 3-5 days and on the third day I'll do a slicked-back ponytail. I get my hair super straight first with our ceramic iron."

13. Ombré: "I love this ombré blonde look! This was back in 2013 and I went for a soft makeup look. Very different from the platinum blonde look. Which blonde do u guys prefer?"

14. Center part, subtle waves, slightly messy: "One of my favorite looks!! This style I will do the day after I wash my hair and use our dry shampoo. #messyvibes"

15. A deep side part: "I did a lot of side parts when I had my shorter hair. Because my hair was lighter and wasn't weighed down it was easier to add volume! This was a messy look with a little texture and volume!"

This content is created and maintained by a third party, and imported onto this page to help users provide their email addresses. You may be able to find more information about this and similar content at piano.io
Advertisement - Continue Reading Below
More From Hair
Hair Glosses That Promise the Ultimate Finish
The Most Game-Changing Natural Hair Products
Advertisement - Continue Reading Below
Our Favorite Organic Shampoos for Lustrous Hair
Layered Haircuts to Pin to Your Mood Board
Go Platinum Blonde Without Destroying Your Hair
The Definitive Guide to Toning Your Hair
Andie MacDowell Goes Gray for Cannes
The L’Oreal Steampod Flat Iron Is On Sale
The Must-Have Products for Air-Drying Your Hair
The Celebrity Guide to Medium-Length Hairstyles