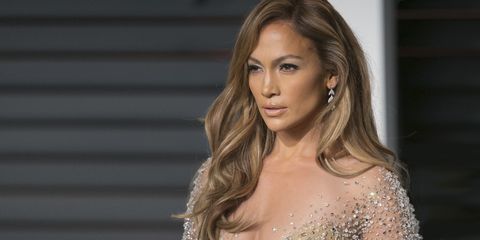 The infidelity of a partner is a painful relationship pitfall that can happen to anyone—even those of us who are rich, famous, have skin that missed the memo on aging, and a booty that refuses to quit.

Such appears to be the case for Jennifer Lopez, who spoke with Glamour UK recently while promoting her film The Boy Next Door, which just opened this weekend in England.

In keeping with the themes of the movie (well, the ones that don't include sleeping with your hot underage neighbor), J.Lo opened up about the emotional struggle that comes with being cheated on. Her advice is something to which anyone who's been there can relate, hard as it may be to actually follow.

"It's about realizing it's not about you," she explained. "When someone cheats on you, it's about them…about their shortcomings. It makes it feel like it's about our shortcomings, like there was something wrong with us... but the truth is, that it's really their ego, and what they need to fill within themselves that drives them to do things like that. Not because you weren't enough."

Serious question, though: What guy had the nerve to cheat on the flawless being that is Jenny from the Block?!

Are Beyonce and Cara Delevingne Making Music Together?

This content is created and maintained by a third party, and imported onto this page to help users provide their email addresses. You may be able to find more information about this and similar content at piano.io
Advertisement - Continue Reading Below
More From Celebrity
Jennifer Lopez on Learning to Love Herself
The Queen May Honor Kate Later This Year
Advertisement - Continue Reading Below
Olivia Wilde & Harry Styles Keep It Profesh on Set
Prince Harry on How Tabloid Attacks Changed Him
Watch Orlando and Katy After Her Performance
Kate Middleton Debuted Long, Straight Hair
Prince Harry's Surprise Inauguration Appearance
Chrissy Teigen Shared a Cute Tom Hanks Story
Gigi and Zayn Finally Reveal Their Daughter's Name
Rihanna Takes Out the Trash on Trump's Last Day