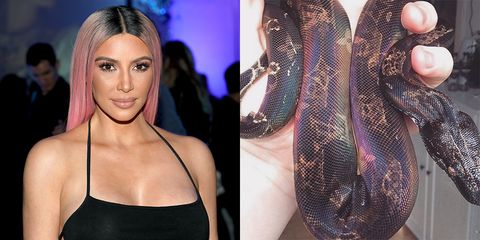 Today, Kim Kardashian introduced the world to the most Kim K animal in existence: Little Louis, a Louis Vuitton-printed snake.

The snake's skin appears to be printed in a purple and gold design featuring the Louis Vuitton logo. So extra, right? So Kim, right?

Kim has a long history with snakes—her fans flooded Taylor Swift's Instagram with them after Kim released footage that appeared to prove Taylor knew about (and approved of) Kanye's controversial reference to her in his song, "Famous."

While some fans were quick to call Photoshop (and more concerned with Kim's lack of credit to the artist than unfair treatment of the snake), others are convinced the print is real and see it as an animal rights issue.

@KimKardashian WHY!? This is inappropriate. I THINK. There's a new snake in town and it's not Little Louis or @taylorswift13! #freelittlelouis pic.twitter.com/n5B4gscCFM

Others just think the snake is proof that Kim has more money than she knows what to do with.