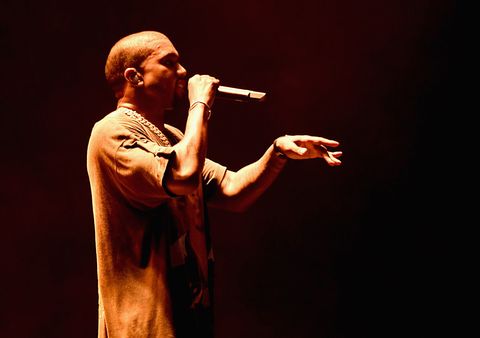 Kanye West rushed off stage and stopped his New York concert early on Sunday night, after he was told his wife Kim Kardashian had been robbed at gunpoint in Paris.

The 39-year-old rapper was performing at the Meadows Music and Arts Festival in Queens when he learned of the news.

Fans on Twitter said Kanye was in the middle of his hit song Heartless when his assistant "pulled him to the side of the stage."

Kanye's performance then came to a halt. In video footage on Twitter, he can be heard saying, "I'm sorry I have a family emergency, I have to stop the show," before he disappeared from the stage.

The concert's early finish left them confused and disappointed as according to the New York Daily News, they had paid between $140 to $260 for tickets. Some attendees questioned whether they could get a refund, but when French police confirmed what Kim had been through later in the evening, fans soon showed their sympathy for the family.

Representatives from Meadows Festival released a statement shortly after the concert ended in support of Kanye.

"Kanye West was forced to end his performance towards the end of his set," the statement read. "We appreciate the great show he put on for fans to close out the inaugural Meadows Festival. Our thoughts are with West and his family."

Kim was in the French capital for Paris Fashion Week. Police confirmed jewellery worth several million euros was stolen during the armed robbery and a spokesperson for the star said she was not harmed.

"Kim Kardashian West was held up at gunpoint inside her Paris hotel room this evening, by two armed masked men dressed as police officers," her representative told E! News. "She is badly shaken but physically unharmed."

The Daily Mail reports Kim left Paris on a private jet in the early hours of Monday morning.