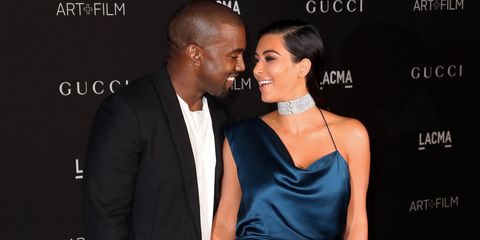 Kanye West is reportedly living apart from his wife Kim Kardashian and their two children after being released from the hospital, an anonymous source told Us Weekly. He's supposedly staying at a rental house as he receives outpatient treatment, the insider added.

On Wednesday, West was released from UCLA Medical Center after being admitted on November 21st for sleep deprivation and exhaustion. He had returned home to Kardashian and their two kids, North and Saint, upon his release. The family even celebrated his homecoming and Saint's first birthday with a "low-key" party.

Though West is living apart from his family for medical reasons, there is speculation that he and Kim are having marriage troubles stemming from Kardashian's traumatic Paris robbery, which some site as a reason for his "erratic behavior."

"Kanye's behavior took a huge toll on their marriage," a source told the weekly. "But Kim feels relieved he is getting the help he needs. She thinks this is what it will take to save him — and help their marriage."

The Kardashian family has yet to make any official statements regarding the rapper's hospitalization and whether he is still living at home; however, West's sister-in-law Kendall Jenner assured: "Everyone is doing ok. Just praying."