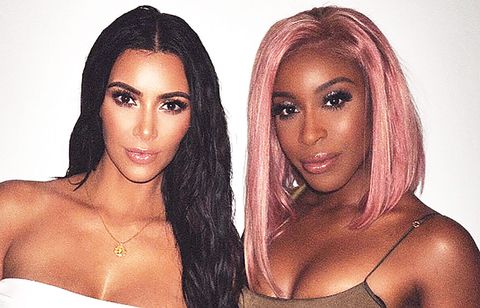 In case you weren't aware, Kim Kardashian launched her first ever product from her beauty line last week. Just wanted to point that out because I don't think many people heard about it...

Archbishop of Banterbury reporting for duty.

Yep, I'm pretty sure that even my Nan, who hasn't left her house for 6 months, is aware that Kim Kardashian just launched her Crème Contour and Highlight Kits.

Some of America's biggest beauty YouTubers got their hands on the kits early, when they were invited to a launch party at Kim's actual house.

Where the magic happened #kkwbeauty

One of the people lucky enough to get a snoop around Kim's house was Jackie Aina, who has almost 1.5 million subscribers on her YouTube channel.

about last night 💖 the #KKWbeauty launch was everything I would want in a beauty launch. Seriously so well put together! Kim invited us into her home and was super sweet and professional. Due to BEYOND overwhelming response I'm going to review their new launch today on my channel! Stay tuned 🌸

Jackie has been making videos for over seven years on YouTube and is known for her honest reviews, especially on products for women of color.

After attending the launch, Jackie posted a video review of the contour kits. Even including a clip of her and Kim at the launch together.

In the video, Jackie gives a very thorough and balanced review of the product. She explains that at $48 the products are "a little on the pricey side" especially considering how much product you get for that.

🔥🔥went alil old skool glam last night for the launch of @kkwbeauty 🔥🔥 had so much fun. @chrisappleton1 #MakeupByMario @kimkardashian

But on the flip side, she admitted that Kim did a "pretty good job" with the shade range, as Jackie explains it can be extremely difficult to find contour colours that are dark enough for black skin.

Summarizing her review, Jackie praised the look, formula, and shade range of the line but also shared her thoughts on Kim launching a contour kit now:

"Part of me kind of feels like it's a little too late to be doing highlight/contour kits. I feel like she should have did this like 5 years ago. That is when something like this really could have taken off. I feel like the whole contour and highlight train has long left the beauty community and that phase was like two years ago."

She also reiterated her view on the $48 the price tag:

"The price point, I'm not really feeling. I just feel like $48 is a little up there. I mean Kim, you could have maybe did a $40 even. $40 makes me feel comfortable, and what's that shipping like if you're in the UK? What's it really going to cost me, what's customs gonna be talking about?"

So how did Kim respond to Jackie's honest review?

Thank you to everyone who came out to my @kkwbeauty launch event! Loved seeing my OG's & meeting so many new people!

Kim uploaded a pic to Instagram of everyone who attended her party and tagged everybody—except Jackie...

Now, this could have been a genuine mistake on Kim's part, but the Internet seems to think otherwise.

Jackie then took to Instagram Live to address the controversy:

"I just gave some really constructive feedback about the product. I didn't glorify the product in my review, but I also didn't bash it. Kim puts up a picture on Instagram of everyone who came to the launch, literally everybody who came to the launch and tagged everyone but me. Is it shadier to not put up a picture at all, or to put the picture up and to not tag the one person? She knew what she was doing. Did I think it was shady? Absolutely. Was it worth attacking her? Not necessarily."

Kim has not addressed the drama but has since removed all the tags from her Instagram pictures.