Feeling mega-poor at the moment? Well, it's about to get worse. Kim Kardashian is doing all right for herself, but now we know how much the reality TV star is actually worth.

The 36-year-old's net worth is thought to be around the $150 million, thanks to Keeping Up With the Kardashians, which makes $10 million per season. And of that, the regular cast members receive a nice little $500,000 bonus to split between them.

Then there's Kim's app, Kim Kardashian: Hollywood, which was launched in 2014. The following year, the game generated a whopping $71.8 million, of which she takes home 40 percent. 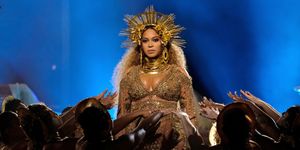 Add the reality show and the app to her book Selfish, her Kimoji app, the personal appearances she makes, and her sponsored posts on Instagram and Twitter (she charges $10,000 per #Spon tweet, ya know?), you can see why she's worth such a lot, right?

This content is created and maintained by a third party, and imported onto this page to help users provide their email addresses. You may be able to find more information about this and similar content at piano.io
Advertisement - Continue Reading Below
More From Celebrity
How the Queen Ends Awkwardly-Long Handshakes
The Queen Has a Rule Against Bad Talking Family
Advertisement - Continue Reading Below
The Queen Took a Pic of Philip With Her to Funeral
The Queen's Tolerance Was the Key to Her Marriage
J.Lo "Likes" Shady IG Post After A-Rod Split 👀
Beyoncé Shares Photos of Her White Power Suit
Will & Kate Welcomed Harry Back Into Their Group
Queen Left a Handwritten Note on Philip's Coffin
The Queen Said Grief Is the Price We Pay for Love
All of the Photos from Prince Philip's Funeral