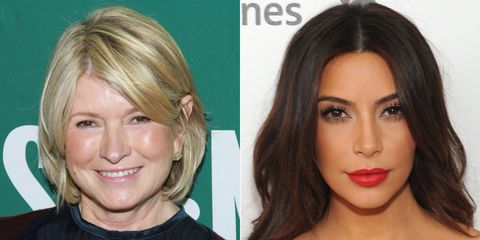 Gwyneth Paltrow and Blake Lively aren't exactly on her list of favorite celebrities, but Martha Stewart tolerates one wildly famous woman enough to write a persuasive essay about why she belongs on a list alongside Angela Merkel, Tim Cook, and Notorious RBG.

Kim Kardashian made Time's 100 most influential people roundup, and yes, they somehow corralled Martha Stewart, prison name "M. Diddy," into explaining how K-Squared and her family are the paragons of modernity and industry and "today's Brady Bunch." Did Martha owe someone a favor? Did Kris Jenner ghostwrite it? Or wait—those people who did Kylie and Kendall's dystopian novel were probably available!

But if you think about it, Martha and Kim are actually kindred, entrepreneurial, polarizing, highly marketable spirits who became household names through grit and great management. You might not particularly like either of them, but you can't deny their success.

Taylor Swift Named the Most Charitable Star of 2014

Chelsea Peng I'm Chelsea Peng, the assistant editor at MarieClaire.com.
This content is created and maintained by a third party, and imported onto this page to help users provide their email addresses. You may be able to find more information about this and similar content at piano.io
Advertisement - Continue Reading Below
More From Celebrity
Chloe From 'Too Hot to Handle' Is in 'The Circle'
Comparing the Two Biggest Royal Weddings
Advertisement - Continue Reading Below
Kate, George, and Charlotte Were Seen Shopping
J.Lo Shares First IG Photo Post A-Rod Split
Harry Has Experienced "Frostiness" from Royals
Billie Eilish Just Debuted a Bouncy Blonde Blowout
Gigi Shared an Adorable Spring Selfie With Khai
Katie Holmes Posted a 15th Bday Tribute to Suri
Chrissy Teigen Talked Stigma Around Infertility
Beyoncé Stuns in a Mesh Dress With Matching Gloves