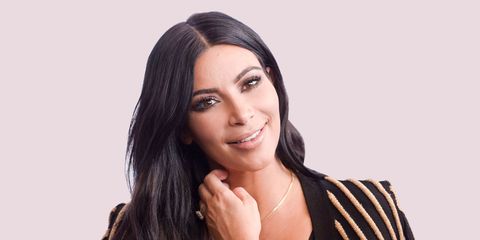 Hear ye, Hear ye! It's official: Kim Kardashian is Team Hillary, or Team Chillary, if you're a koozie-toting millennial.

Last night, Kardashian just happened to find herself in conversation with LaDoris Cordell, Northern California's first female black judge, at the illustrious Commonwealth Club of California. When asked if she thought Hillary Clinton should become our next president, she responded: "I hope so!" before sharing that she's also pro gay marriage and gun control.

Alas, while Kardashian is a notorious devotee of labels like Givenchy, Balmain, and Balenciaga, there are *certain* labels she's less willing to align herself with. "I guess people would call me a feminist," she said. "I believe in doing what makes you feel comfortable. I don't like to label myself."

But, honestly, that may be because Kardashian knows she's under a microscope—and everything she says can and will be used against her. "I think people still look at me as the persona that's portrayed on the show," she said. "The show doesn't video my boring work meetings throughout the day. It's hard when people want to put you in a certain box or a certain way. I don't pay much attention to it."

But c'mon, Kiki, if the strappy nude shoe fits...