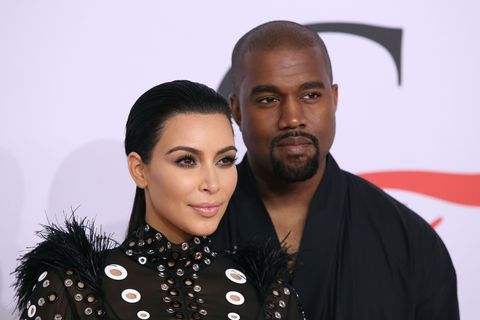 If their past three years together have taught us anything, it's that Kim Kardashian and Kanye West like to celebrate birthdays and relationship milestones in a BIG way. Like, "PLEEEASE MARRY MEEE!!!.," flashing on a jumbotron kind of big.

But it would seem that Kimy, does know how to dial it back—considering that they spent their first anniversary holed up in their home (okay, a $20 mansion compound) watching Troop Beverly Hills, which had been DVR'd by West. (An excellent choice, we might add.)

Their refreshments? Why a private bartender served them piña coladas in bed, a source told Us Weekly—who also points that West is, in fact, a frozen-drink fanatic, going so far as to sample Rupert Holmes' "Escape (The Piña Colada Song)." So, if this fly-on-the-wall source is to be believed we've learned two things: 1) Kimye is human and 2) West likes piña coladas and, by default, getting caught in the rain.

And for anyone's skeptical that they're fans of the 1989 cult classic, look no further than Kim Kardashian's three-month-old Vine in which she dubs one of the film's most famous lines: "I may be a beginner at some things, but I've got a black belt in shopping."