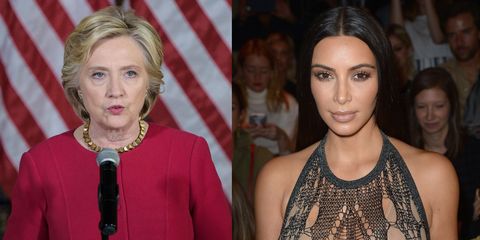 Kim Kardashian and Hillary Clinton are low-key friends (please see Exhibit A down below), so it's hardly surprising that the presidential hopeful has spoken out about Kim's attack in Paris—where she was gagged, bound, and robbed of a $4.5 million ring Kanye West gave her.

While speaking to Extra, Clinton said "I felt really bad for her," and then expressed her concern for Kanye. "He was in the middle of the concert and he ran offstage, bless his heart. No, it's horrible. I'm just glad nobody was hurt."

For anyone serving side-eye at Clinton for commenting on pop culture when she "should be talking about [Insert Important Political Thing Here]," keep in mind that her comments follow an endless barrage of victim blaming against Kim, which speaks to the narrative surrounding assault and violence against women in general.

It's totally appropriate for Clinton (Kim's chosen candidate) and Trump to voice concern for Kim, because at the end of the day she's a woman who was attacked by a group of strange men. She deserves support.

I got my selfie!!! I really loved hearing her speak & hearing her goals for our country! #HillaryForPresident