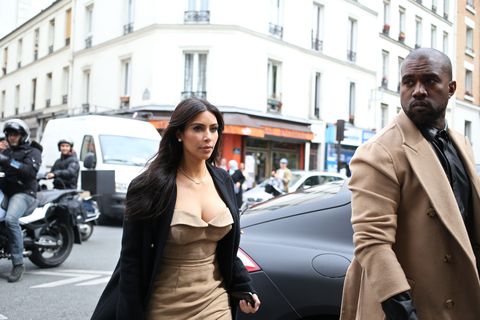 We knew Kim Kardashian and Kanye West were bound to star in their own fashion campaign eventually—it was more a matter of which brand would snag the high-profile couple first. As of this morning, the victor is none other than Balmain for Spring 2015.

Kardashian unveiled a Mario Sorrenti-lensed image of herself and West in mid-embrace (uh-huh, honey) captioned "BALMAIN!!!!!!" on Instagram just after 8:30 a.m. Considering the pair's close relationship with designer Olivier Rousteg, it's no surprise that they're the fashion house's latest faces—along with campaign costars Rosie Huntington-Whitely, Adriana Lima, and Joan Smalls.

And perhaps this helps explain why little sister Kendall Jenner, who had been thought to be a top contender to be featured in the campaign after walking in Balmain's Paris Fashion Week show in September, was passed over this time around. There's only so much room in the Kardashian spotlight, after all.

Update: More images from the sexy campaign have been released:

This content is created and maintained by a third party, and imported onto this page to help users provide their email addresses. You may be able to find more information about this and similar content at piano.io
Advertisement - Continue Reading Below
More From Fashion
Your Fall Wedding Outfit Cheat Sheet
A Puffer Jacket Is Your Winter Essential
Advertisement - Continue Reading Below
The Top Fall 2021 Handbag Trends
Refreshing Ways to Style a Cardigan
The Foolproof Guide to Cleaning Your Jewelry
Nordstrom's 2021 Anniversary Sale Is the Best Yet
Hats That Will Make a Statement—In a Good Way
The Most Exciting Jewelry Trends for Fall 2021
Maxi Dresses That Work for Every Occassion
The 100 Best Shopping Sites to Browse Through