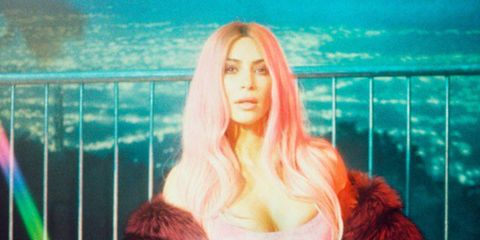 Kim Kardashian is known for reinventing herself, especially for magazine photoshoots, but her latest transformation is really something. In the forthcoming issue of CR Fashion Book, Kim trades in her distinctive style, for some '90s-inspired red carpet looks.

CR enlisted photographer Petra Collins for the shoot, to capture the iconic Kardashian as she replicated some of the most famous fashion looks from the '90s. And the two most important style icons for the team: Lil' Kim's look from the 1999 MTV Video Music Awards, and Pamela Anderson's '90s red carpet style.

And here's her Lil' Kim inspired-look, which she pulls off with aplomb:

Amy Mackelden Weekend Editor Amy Mackelden is the Weekend Editor at HarpersBAZAAR.com, where she writes about entertainment, celebrity news, beauty, and fashion.
Advertisement - Continue Reading Below
More From Fashion
We Found the Best Modest Swimsuits for Summer
Fashion Comes Together to Fight Coronavirus
Advertisement - Continue Reading Below
Your Official Guide to the Royal Family's Tiaras
20 Women-Owned Small Fashion Brands We Love
Everlane Is Having a Sale on Its Coziest Clothing
All the Different Ways to Wear a Floral Skirt
Yes, You Need a Pencil Skirt
Anthropologie’s WFH Edit Is 40% Off Right Now
52 Celebrities Who Mastered ﻿'80s Fashion
Shop Adidas' Sale for Cute Home Workout Outfits