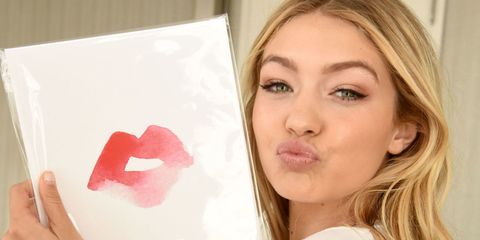 💬💬💬 I'VE GOT A VERY SPECIAL EXCITING AMAZING ANNOUNCEMENT, and you only have to wait 15 seconds to find out if you press play! Cc: @MAYBELLINE 💄

Hadid is the new face of the brand, she says at the end of a super cute Q&A Instagram video. (We also learned she likes boxing and the little elephant emoji, but that's slightly less significant.) She also gushed about the gig on Twitter:

I'm so beyond honored & excited (at a loss for words, really) to be the new face of @Maybelline! 💘 @IMGmodels

& TY to the @Maybelline team for being so welcoming; it's a dream come true to be a part of this family.💄#BornWithIt pic.twitter.com/Gv634k9Vud

Coincidentally, Hadid isn't the only reality star-turned-model to nab a beauty campaign lately. Fellow top 50 model Kendall Jenner landed a job with Estée Lauder last year. Considering she and Hadid are BFFs, can we expect a friendly rivalry—perhaps a selfie pout-off—in our futures?

The Models at Marc Jacobs Wore Absolutely No Makeup

Alyssa Bailey News and Strategy Editor Alyssa Bailey is the news and strategy editor at ELLE.com, where she oversees coverage of celebrities and royals (particularly Meghan Markle and Kate Middleton).
Advertisement - Continue Reading Below
More From Beauty
The Teeth Whiteners I’ve Tried and Loved
The Must-Have Products for Air-Drying Your Hair
Advertisement - Continue Reading Below
16 Super Pretty Valentine's Day Makeup Tutorials
Ashley Benson's Bob Just Got a Major Makeover
Editor-Approved: The Best No-Streak Self-Tanners
Pat McGrath's New Lipgloss Is Everything
Selena Gomez Looks So Different With a Curly Lob
Nailed It: The Ultimate Guide to a Better Manicure
How to Give Yourself the Quickest Mani Ever
Do You Have Trash Nails?