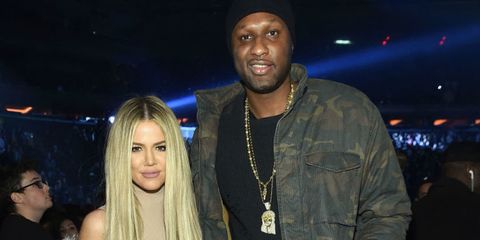 Khloé Kardashian and Lamar Odom's divorce is officially back on again.

According to TMZ, the reality star filed for divorce from her husband for a second time this Thursday, again citing "irreconcilable differences." Sources close to the couple say that their breakup has been amicable, and since they allegedly have a prenup in place, all that's left to do is to wait for the divorce to be finalized. According to Khloé's divorce petition, she has also formally requested to drop Lamar's last name.

The pair first filed for divorce in December of 2013, but Khloé called it off last October after Lamar was found unconscious at a Nevada brothel and hospitalized while in a coma. Since then, Khloé has made it clear that her decision to delay their divorce wasn't a romantic one: She simply felt it would be insensitive to push the matter while he was still in recovery.

The decision to go through with the divorce, however, hasn't been an easy one for Khloé. Recently, she opened up about how her Christian faith stood in the way of getting it done sooner rather than later in an essay for Lenny.

"At my core, I don't believe in divorce," she wrote. "But I came to a point in my marriage where I had to make the choice to take care of my own mental and emotional well-being in order to protect myself and my happiness."

"I am at peace with that decision and do feel like I honored my vows to the very end," she continued. "I feel that I kept the serious vows I made in front of God with every inch of my heart, which is why I am still honoring them today even though my relationship with my ex-husband is in a different place."