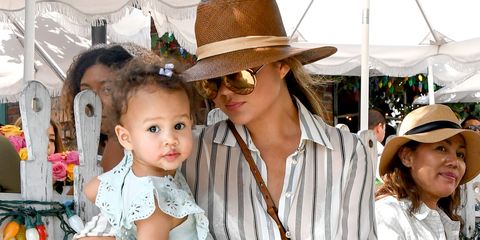 At this point, it goes without saying that Chrissy Teigen is an amazing mom. In May, she and John Legend welcomed their second child, a son named Miles Theodore. On Saturday morning, Chrissy shared a topless photo of herself breastfeeding. Neither nipple is free, however, because Chrissy has a baby on each breast.

The other baby? One of Luna's dolls, because Chrissy is that kind of mom.

"Luna making me feed her babydoll so I guess I have twins now," Chrissy captioned the photo.

Last night, Chrissy posted a video of John Legend exemplifying #DadGoals. In the clip, John burps Miles while Luna climbs on his head like he's a jungle gym. And John takes it all in stride, like a pro.

And the Parents of the Century are, obviously, Chrissy and John.