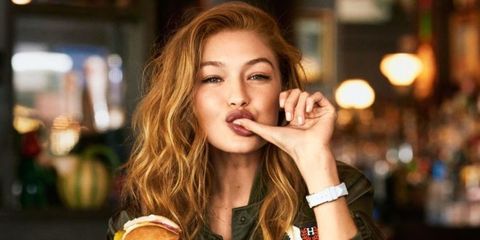 Try to lob a lazy insult like "Go eat a sandwich" at Gigi Hadid and she will probably be all, "I'm going to go eat a burger, thanks, bye." At least that's what it sounds like from the model's Harper's Bazaar cover story for the magazine's October issue—girl likes to eat!

Gigi went through a day in her life for the magazine and revealed all the foods she enjoys. And yes, burgers made the list.

1. Scrambled eggs, bacon, and toast. Gigi says she lives near The Smile, a restaurant in New York City's NoHo neighborhood. She'll often start her day with breakfast there, which includes scrambled eggs and sourdough toast, plus a $5 side of bacon. "I drink orange juice and coffee always," she says.

2. Breakfast beans. The all-important Zayn gets credited for this one: "At home I love scrambled eggs and toast; it's just an easy go-to," Gigi says. "My boyfriend, being British, got me into breakfast beans, so that's what I've been eating lately."

3. Burgers. This is a lunch thing, which usually happens around noon. "My personal motto is 'Eat clean to stay fit, have a burger to stay sane,' so if I'm in the mood I'll go to JG Melon in the West Village," she says.

4. Arugula salad. Burgers, the exception. A more regular lunch for Gigi is green. "Again, I love The Smile. They have a little arugula salad that I could eat every day."

5. Grasshopper Pie ice cream. "There used to be an Emack & Bolio's on Houston Street, which is my favorite ice-cream place—I love the Grasshopper Pie—and I would walk past it on my way to the gym every day, but one day it was closed and I almost cried. Now I'll just Postmate pints of it to my apartment."

6. Sushi. "If I'm going out, I like to go for dinner and drinks with friends," Gigi says. "I love Bond Street for sushi." The trendy restaurant is known for its upscale sushi. Bonus: Like The Smile, it's close to where Gigi lives.

Sushi anyone? From now on, I only eat ootoro if it has gold on it #bondst #bondstnyc #fuckloadsoffish