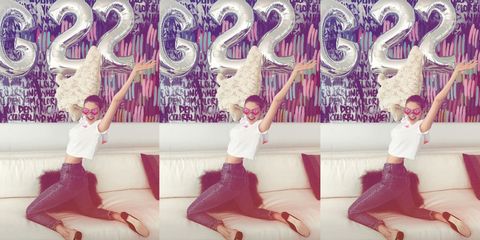 For her 21st birthday last year, Gigi Hadid had a party with family, went to the beach in Malibu with her boyfriend Zayn Malik and sister Bella Hadid, then ended the weekend at Coachella—which she, Taylor Swift, and Calvin Harris flew to via private plane.

For her 22nd birthday yesterday, Gigi painted, went on a sunset helicopter ride, wore a pink wig at her party, and got many, many giant bouquets of flowers in New York. (None as big as the massive one Cody Simpson sent two years ago, but hey.)

Gigi Hadid carrying one bouquet of flowers out in New York City.

The day started low-key, with she and her sis Bella Hadid water-coloring. Bella documented their creations on her Instagram stories. Zayn's eyeball got a special portrait, and Gigi did a pretty impressive CatDog portrait for him:

Gigi later went on a sunset helicopter ride with Bella and Hailey Baldwin:

She and Zayn also posed with her matching, millennial pink cake:

Zayn posted his own tribute to Gigi, whom he called "my everything":

During the day, Gigi documented the many bouquets of flowers she received, including ones from Taylor Swift, Karlie Kloss, and an Abel (presumably Abel Tesfaye, aka The Weeknd, Bella Hadid's ex-boyfriend. They still follow each other on Insta):

The day wrapped with a good 'ol apartment party where Gigi danced along with her friends, wearing a pink wig:

Taylor Swift wasn't photographed at the party, but she was there in spirit. Gigi and Bella jammed to her song "22" at one point—the most 22 year-old, squad member thing to do on the big day:

Alyssa Bailey News and Strategy Editor Alyssa Bailey is the news and strategy editor at ELLE.com, where she oversees coverage of celebrities and royals (particularly Meghan Markle and Kate Middleton).
This content is created and maintained by a third party, and imported onto this page to help users provide their email addresses. You may be able to find more information about this and similar content at piano.io
Advertisement - Continue Reading Below
More From Celebrity
Royals Had Several Talks About Archie's Skin Color
See Blake Lively's *Impressive* Watermelon Cake
Advertisement - Continue Reading Below
Prince Charles Cant Deal with Harry's Criticisms
Serena Gave Daughter Olympia a Tennis Lesson
Meghan Shared What Helped Her Through 2020
Kylie and Travis Are "Very Close" After Reuniting
Meghan's Book 'The Bench' Tops Best Sellers List
Kaavia Talks to a Bee in an Adorable IG Video
David Harbour on Being Stepdad to Lily Allen's Kid
Ben Affleck Is "Getting to Know" J.Lo's Kids