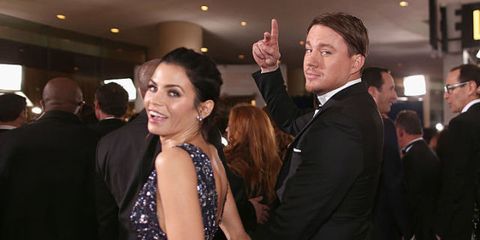 I think it's safe to say that Channing Tatum and Jenna Dewan's daughter isn't the ~biggest~ fan of their early acting careers.

"It was so funny, we were like, 'Everly, Everly, look! It's mommy and daddy!' At first she didn't think it was us," Jenna told the site. "She's like, 'That's not you guys.' And I'm like, 'No, it's us, Evie, it's me!' And then she goes, 'Can we watch something good?' Just like that, and we were humbled. One day she'll maybe appreciate it on a different level, but yeah, she's not so into it."

Everly will grow up and learn! One day she will understand the glory that is Step Up! And maybe her parents will learn to appreciate its genius, too — as Jenna shares in the interview, they're both a little bit mortified by it now.

"We both cringe because ... we're just so baby new ― our acting, we're like, 'What are we doing there?!' Jenna said. "It's so sweet. We were talking about it the other day, like, 'Do we remember that routine at the end?' I think when it was the 10-year anniversary we did the lift outside in our yard just to prove that we could still do it!"

Jenna also shared that Everly has been to rehearsals for Magic Mike, and that they plan to show her the entire movie before someone at school does.

"We got to show ['Magic Mike'] to her before one of her friends at school is like, 'I saw this movie your dad's in...' She's been at rehearsals so there's a part of her that probably gets it."

When Everly grows up and finds out about her dad and Magic Mike, Merriam-Webster is gonna have to invent a new word from proud-embarrassed.