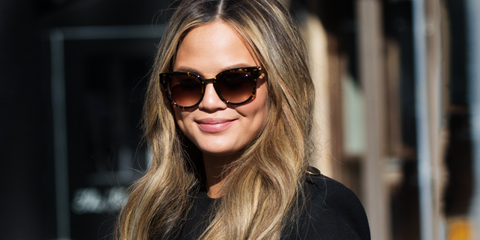 Barack Obama wears many hats (Kendrick Lamar fan-boy, Grammy winner, President of the USA/our hearts), and his latest is the ability to morph into an IRL baby name book. Consider him the human incarnation of Babble, only also running our country.

Chrissy Teigen used Obama's talents for help naming her own baby, a fact she revealed during The Late Show. "I asked Barack—we're like very first name basis—I asked President Obama if he liked one of our name choices and he said he did," she told Stephen Colbert. "I realized, I should have come up with two so he could pick one, because you know, you've got to be nice about it if you give someone a name."

Who wouldn't use their time with Barak Obama to discuss baby names, right? These things are important. Plus, Chrissy and her husband, John Legend, don't agree on the chosen moniker for their little girl, which pretty much makes Obama an unofficial marriage counselor.

"I wanted to ask him because John isn't sold on the name so I figured if [the President] liked it, then John would be sold on it," Chrissy explained. "He says it's too Hollywood."

Honestly, if Obama okays the name Saint Ivy Otter, it'll be the greatest thing he's done for this country.

Mehera Bonner Contributor Mehera Bonner is a news writer who focuses on celebrities and royals—follow her on Instagram.
This content is created and maintained by a third party, and imported onto this page to help users provide their email addresses. You may be able to find more information about this and similar content at piano.io
Advertisement - Continue Reading Below
More From Celebrity
Katie Holmes' Mango Puffer Coat is a Winter Staple
Kate Rewore Her Favorite Festive Tartan Dress
Advertisement - Continue Reading Below
Kate and Charlotte Hunt for Spiders Together
Princess Diana's Nieces Opened Up About Their Aunt
Elizabeth Hurley, 55, Shows Off Toned Abs On Insta
Keira Knightley Won't Do Nude Scenes Filmed by Men
Kourtney Kardashian Is Dating Travis Barker
Priyanka Chopra Jonas Talks Her New Memoir
Priyanka and Nick on Their Quarantine Quality Time
Priyanka Pulls Back the Curtain