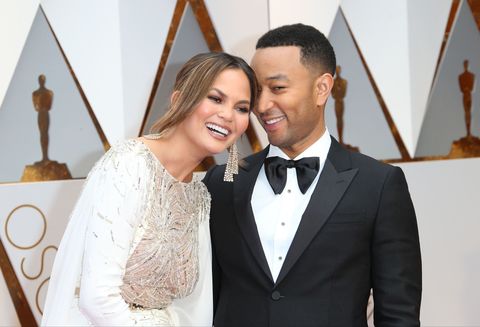 Chrissy Teigen and John Legend are obviously a perfect couple (largely because they give zero f*cks about actually being perfect), but apparently Legend tried to break up with his then-girlfriend once, and she wasn't having it.

"I was really stressed and busy," he told The Guardian in a recent interview. "I was just like: 'I'd just be happier single right now,' and she was like: 'No.'"

Sounds about right. The breakup lasted less than a half hour, and went down 11 years ago—at least according to Teigen, who took it to Twitter in response:

It wasn't a a typical breakup. He was on tour and his voice hurt and he was being a whiny face about everything and so yeah, I was like "no"

In the words of everyone on Twitter bowing down at Chrissy Teigen's greatness:

Also FYI, this isn't the first time Chrissy's talked about this incident. Back in ye olde days of 2016 (simpler times!), she said "I knew it came from a place other than us not working ... I always joke, 'Remember when you tried to break up with me?' He's like, 'Yes, sorry. Big mistake.'"